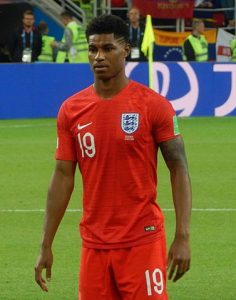 Marcus Rashford MBE, Manchester United and England footballer, has launched a campaign encouraging people across the UK to write to their MP in support of three recommendations in Henry Dimbleby’s report, The National Food Strategy, to help end food insecurity for children. Marcus is asking members of the public to visit the website www.endchildfoodpoverty.org to write to their MP, ahead of the Government Spending Review, expected in October.

New data, commissioned by The Food Foundation, from YouGov shows that more UK households with children are now experiencing food insecurity than were in the first wave of the pandemic. Furthermore, 15% have experienced food insecurity in the past six months. These levels are approximately 27% higher than before the COVID-19 pandemic. In addition, food prices have been consistently higher in the first six months of this year than they were towards the end of 2020.

The three recommendations from the National Food Strategy that Marcus is supporting will guarantee that every child at risk of going hungry eats some good food every day:

Working with Marcus on the campaign, The Food Foundation believes that current record highs in food insecurity can be reduced by ensuring families have the financial means – whether directly through paid employment or from benefit payments – to purchase sufficient food. Government schemes such as Free School Meals and Healthy Start also help to guarantee some basic nutrition protection for children when they are growing and learning.

The very low threshold in England means that half of children who are from food insecure households are excluded from free school meals because their families earn just above £7,400 – that’s around 350,000 children.

YouGov research from August shows that 80% of adults in England say they would support the expansion of Free School Meal eligibility to all children experiencing food poverty.

“While we’ve come a long way in the last 20 months, [and have placed] the issue of child food poverty at the forefront, devastatingly, the issue is getting worse, not better. What is it going to take for these children to be prioritised? Instead of removing support through social security, we should be focusing efforts on developing a sustainable long-term roadmap out of this child hunger pandemic. It will take many of us to stand together on this, and show we care about reaching those most in need in our communities.”

You can find out more about which cookies we are using or switch them off in settings.

This website uses cookies so that we can provide you with the best user experience possible. Cookie information is stored in your browser and performs functions such as recognising you when you return to our website and helping our team to understand which sections of the website you find most interesting and useful.

Necessary cookies enable core functionality such as security, network management, and accessibility. You may disable these by changing your browser settings, but this may affect how the website functions.

If you disable this cookie, we will not be able to save your preferences. This means that every time you visit this website you will need to enable or disable cookies again.

We would like to set Google Analytics cookies to help us to improve our website by collecting and reporting information on how you use it. The cookies collect information in a way that does not directly identify anyone. For more information on how these cookies work, please see our Cookies page.

We use Twitter for some marketing activities on our site, and will set some cookies for this purpose if you consent.

Please enable Strictly Necessary Cookies first so that we can save your preferences!

We use the income from advertising to help fund nutrition2me.com services.

We implement our own tracking cookies via our Word Press advertisement plug-in (Advanced Ads).  Advanced Ads provides us with data on advertisement engagement.  This data is anonymous.  We use this data for our own statistical monitoring and also to share with advertisers/clients that have placed advertisements.

Third-party cookies are set by a domain other than the one you are visiting, in this instance nutrition2me.com.  This includes social media (e.g. Facebook, Twitter, LinkedIn, Instagram), advertiser/client plug-ins or advertising that may be hosted by a click tag.  When the browser or other software fetches these elements from the other sites, they can set cookies as well.

Please enable Strictly Necessary Cookies first so that we can save your preferences!

Powered by  GDPR Cookie Compliance
The CN Emailers service – including CN e-news and CN e-shots – keeps you up-to-date with the latest nutrition news, product and service innovations, events, along with information on your No.1 nutrition publication – Complete Nutrition (CN) Magazine. When subscribing to CN Emailers, you will receive CN e-news – the twice monthly e-newsletter from CN Magazine – CN e-shots, along with details on CN Competitions & surveys, CNPD, and the CN Awards. Please note that when submitting your details via the form above, we will only hold and process the data you provide in order for you to receive CN Emailers only. If you wish to stop receiving CN Emailers at anytime, please email: info@cm-2.co.uk. Please click here to access our Privacy Policy.